Bicentenary of the birth of Courbet, a visionary and revolutionary painter

200 years ago, was born in Ornans Gustave Courbet, a painter and leader of the realistic movement. The bicentenary of his birth is an opportunity for us to look back at the work and life of one of the most controversial painters of the nineteenth century.

What to remember about this famous artist?

First of all, the pictorial revolution he instilled. Indeed, Courbet very quickly broke away from the conventional norms of his time, marking, through his paintings, a break with the idealistic and romantic movement of the early 19th century. Author of more than a thousand works, he paints characters from all social classes and considered ugly or even rude at the time, thus breaking with the conventional idealization of classical painting characters.

Un enterrement à Ornans (1849-1850), a revolution in painting through the choice of characters

The artist thus became part of the artistic effervescence of his century and stood as an innovative painter, accompanying the evolution of art in parallel with the liberation of writing and the beginning of the deconstruction of poetry.

Revolutionary, certainly, but also controversial. True disrupter of art’s boundaries, Courbet encountered many refusals in the salons of the time, due to the Academy’s conservatism. For example, he was strongly criticized by Théophile Gautier, an “art for art” enthusiast, who thought art had to aim solely at beauty and perfection. His paintings, considered too “socialist”, unattractive and vulgar, also led him to be excluded from universal exhibitions.

However, these numerous rejections did not weaken the painter’s creative thinking. More than money, it is the desire to be heard that drives him, regardless of whether or not it is appreciated. His works are manifests in themselves. He is attributed these words: “When I will no longer be challenged, I will no longer be important”. Courbet thus aspired to recognition to denounce, upset, transform his time and free painting from traditional themes.
He painted many landscapes, self-portraits such as The Man with a Leather Belt (1845-1846) but also scenes of liberation from the mores and body of women. Les baigneuses (1853), a representation of a naked, non-idealized woman, stands in contrast to the female academic perception of the time and is one of the painter’s most controversial paintings. 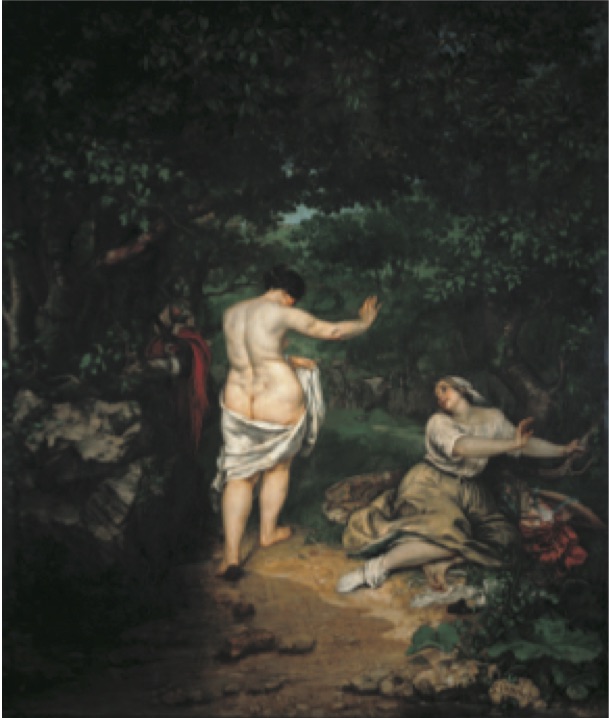 While the 19th century, particularly during the Second Empire, which imposed strict codes and customs, Courbet joined the ranks of these self-taught and non-conformist artists, including Carpeaux, Baudelaire and Millet.

The Origin of the World (1866), a bold painting of female intimacy, still makes great noise today. Considered provocative and pornographic, the work was only shown to the public twice before its exhibition at the Musée d’Orsay in 1995. Formerly the property of the Lacan collector and psychoanalyst, the latter exhibited it behind another painting commissioned from the painter Masson to conceal it, going against the message conveyed by the canvas. A whole symbol. Often misinterpreted, the work is a cry both artistic and political. Much more than a simple homage to women, the canvas raises strong questions in this era that locks women into corsets and norms. Beyond social classes, customs and rules, wouldn’t all men finally come from the same place? Wouldn’t they all have the same origin? Can this reminder to the sources not, moreover, still be part of our news?

Without erasing the painter, it seems essential to recall the committed man. Courbet quickly established himself as a frank artist, enemy of the bourgeoisie and the traditional order and was at the heart of the 1848 revolution; this is why there is a strong link between his political and pictorial ideas, realism being “democratic art” according to him. Close to thinkers such as Proudhon, the painter has throughout his life been involved in many artistic as well as social struggles. A keen actor in the Paris Commune of 1871, he was accused of being at the origin of the abatement of the Place Vendôme column and was therefore imprisoned and condemned to pay the costs of its reconstruction.

What can we learn from Courbet in the end? More than an artist, he was a true thinker, who dared not only to think but above all to think differently. It is therefore quite striking today to see to what extent this man was both on the fringes of his century and finally anchored in its demands. Disruptive, it has truly broken the codes of good thinking and decorum, and has shaken up good taste and morals in all areas.

Died in 1877 in La Tour-de-Peilz (Switzerland), ruined and ill, Gustave Courbet did not enjoy the success that his works would meet a few years later, nor the inspiration that it triggered given to many of his contemporaries such as Manet, Renoir, or Henri Fantin-Latour. After him, many artists will continue on the path of realism and non-conformism, such as Zola with naturalism.