From January 29th to February 18th, the Banff Center for Arts and Creativity hosted Bridging realities, an innovative lab which aim was to confront the emerging medium of Mixed Reality to the Performing Arts, and in particular Opera. During this three weeks intensive program, the lab explored many questions to know if technology can enhance, augment and create a new experience that didn’t exist before and thrust opera ahead.

Thanks to a partnership between the Banff Center, the French Embassy in Canada and the Institut Français, the videast-director and sound designer David Daurier was invited to participate to this experience and to work with professional coming from the whole world: musicians, singers, conductors, stage directors, technicians.

Sound, motion capture, immersive virtual, augmented reality experiences and live versus recorded performances: discussions have been significant, and workshops also enabled to create first experiences with some works of Monteverdi or Puccini.

The aim: break down preconceptions around technology, learn how to work with a team of different skilled practitioners and demystify the use of technology in performing arts. Bridging Realities enables to move forward the debate about these new immersive forms which will no doubt impact cultural productions in the future. 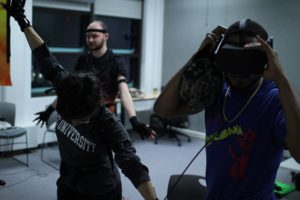