Dr. Bernard Jasmin, vice-dean research at the University of Ottawa Faculty of Medicine, and his French colleague, Professor Laurent Schaeffer of the Université Claude Bernard Lyon 1, are launching a joint international neuromuscular research partnership, thanks to an agreement signed this week.

This is truly an exciting and exceptional opportunity to bring together researchers and clinicians interested in neuromuscular diseases (NDMs) from two leading centres,” said Jasmin.  “The synergy created by this partnership will not only benefit trainees and faculty members from both sites but, in addition, will accelerate the development of novel and much-needed therapeutic strategies for NMDs.”

Over the next five years, uOttawa’s Centre for Neuromuscular Disease (CNMD) and the University of Lyon’s Institut NeuroMyoGène (INMG) will jointly fund four high-calibre scientific projects annually in the area of neuromuscular disease, involving at least one research team from CNMD and one from INMG.

“Our universities have a common goal of world class research excellence,” said University of Ottawa VP Research Mona Nemer, who received an honorary doctorate from the Université de Lyon in 2009. “We are very proud to be fostering scientific collaboration between our institutions through this new joint initiative.”

Created in 1999, the CNMD’s goal is to advance the fundamental understanding of neuromuscular development and disease and to discover novel therapies to treat these devastating disorders, such as Duchenne muscular dystrophy, spinal muscular atrophy, myotonic dystrophy and myasthenia gravis. 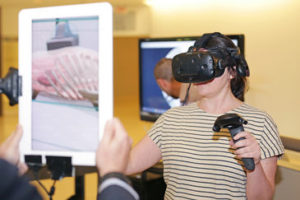 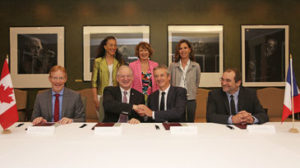