MOBILITY GRANT – Dr. Dagorne researcher in the University of Strasbourg went to UBC

Thanks to a mobility grant from the Scientific Service, Dr. Dagorne, researcher in Chemistry at the Institut de Chimie de Strasbourg, went to Vancouver to meet with Dr. Mehrkhodavandi from University of British columbia (UBC). During his stay, they work on new collaborations around Green Polymer.
Biodegradable and biocompatible materials originating from renewable resources hold great potential for use in numerous applications, notably in the biomedical area and as alternatives to petroleum-based plastics. Polymerization catalysis of small renewable molecules constitutes a method of choice to effectively produce such materials in a controllable manner. This approach requires the design and synthesis of specific catalysts. In that context, the proposed joint research project aims at the production of biodegradable materials derived from lactic acid, a renewable resource, through effective organo-metallic polymerization catalysis. Specifically, the development of robust metal-based polymerization catalysts is targeted, so that to be able to efficiently produce biodegradable plastics in a well-defined manner. The metal catalysts that will be used in the present project are expected to combine low toxicity, high polymerization activity and enhanced stability relative to catalysts thus far developed.

Samuel Dagorne completed his undergraduate degree at the University of Rennes (France) in 1994. In 1995, he joined the group of Professor Richard F. Jordan at the University of Iowa (Iowa City, USA) and graduated with a PhD in organometallic chemistry in 1999. In 1999, he joined the group of Professor Richard R. Schrock (MIT, USA) as a post-doctoral associate. Back in France, he began his independent career at the CNRS as a research scientist in 2000 and was promoted to CNRS research director in 2015. He is currently a group leader in the Institute of Chemistry of Strasbourg (Université de Strasbourg – CNRS, UMR 7177) and was recently appointed (in 2016) to the “Comité National de la Recherche Scientifique” (Paris, France) for a mandate of five years. In 2013, he was awarded the SCS (Swiss Chemical Society) Sandmeyer award for the development of robust carbene-stabilized polymerization catalysts. His research interests currently focus on the use of carbene-stabilized organometallics for use in homogeneous catalysis, including polymerization of polar monomers. 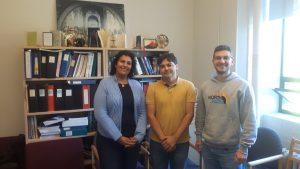