Starring Sandrine Kiberlain, Gilles Lellouche and Elodie Bouchez, the film follows the life of young Theo, handed over for adoption by his mother on the day of his birth. This is when the child welfare and adoption services begin to move. Some have to take care of the baby in this period of uncertainty. The others have to find the one who will become her adoptive mother. Her name is Alice and she has been fighting to have a child for ten years. PUPILLE is the story of the encounter between Alice, 41 years old, and Theo, three months old. 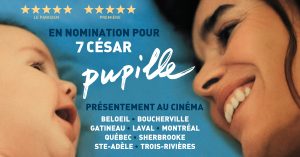