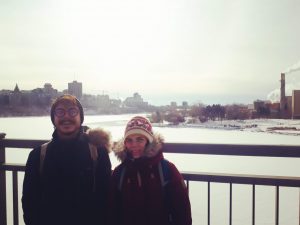 On October 22, 2018, representatives from the University of Ottawa and Université Lumière-Lyon 2 signed an agreement at the Embassy of France in Canada, creating the first Franco-Canadian double degree in the field of language teaching and bilingualism. Thus, and since January 2019, two French students are welcomed each year for a semester of study at the Official Languages and Bilingualism Institute within the framework of the Master’s Degree in Bilingualism Studies.

Since January 2020, two French students from the University of Lyon 2, Apolline Glais and Jean Carteron, have been in Ottawa as part of this exchange. Before undertaking a Master’s degree in French as a Foreign Language in Lyon, Apolline had obtained a Bachelor’s degree in Humanities and Social Sciences at the University of Lyon 2 and Jean, a Bachelor’s degree in Modern Languages at the University of Rennes 2. For these two future professors and researchers, Ottawa, a bilingual city in a bilingual country, represented an opportunity to be seized. Among the courses that they particularly appreciated during this semester, they note the courses on research methodology, as well as the one on the “ethnographic view of bilingualism in the world”. During and at the end of the semester, both students were able to do teaching and research assistantships – in addition to writing a thesis for their home university – and thus gain initial professional experience in Canada.

The responsibilities given to them in this context are, moreover, one of the differences they observed between the French and Canadian university systems. Apolline and Jean considered the teacher-student hierarchical relationship to be much less marked in Canada than in France. Moreover, the student is often solicited by the teacher and is invited to contribute to the classroom. If teachers take the time to accompany them, it is mainly because the classes are smaller (10 students in their case) and tuition fees are higher in Canada than in France, which raises the level of their expectations in terms of accompaniment and equipment.

According to the two students from Lyon, there are many advantages to completing a double degree. For example, obtaining a degree from a quality Canadian university, such as the University of Ottawa, is a major asset that will open doors for them in France as well as in Canada. Indeed, they point out that this type of program is more advantageous than an inter-university exchange, since they obtain a degree from each university without having to pay the tuition fees of the host university. They have both been able to benefit from financial support for their mobility abroad from the Auvergne-Rhône-Alpes region and their home university. Although they did not plan to stay in Canada following their stay in Ottawa, they admit that they were attracted by Canada and its many professional opportunities, as well as by its teaching methods. While Apolline would like to start working in teaching before turning to pedagogical design, Jean would like to teach in a somewhat specific environment: that of the prison, for example. Confinement having slowed them down in their adventure, they would like to continue to discover Canada and to reflect on the issues related to language teaching in the Canadian context after obtaining their double degree.

Their positive feedback encourages us to pursue our efforts to develop tools for cooperation, such as double degrees, at the educational and university level between France and Canada.

We thank Apolline and Jean for their testimonies and wish them every success in Canada, France or elsewhere!

For further information, you can visit the website of the Official Languages and Bilingualism Institute.